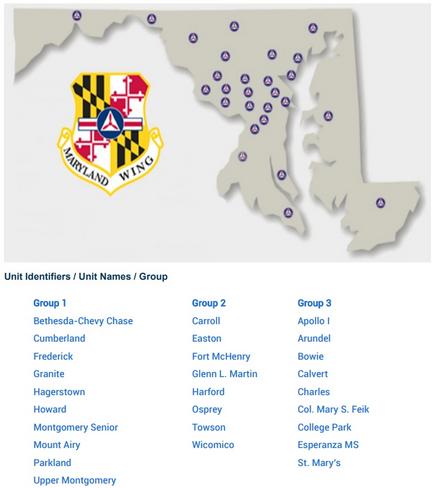 Prospective members are always welcome to attend! Just let us know you are coming so we can meet you at security.  You can reach out to our Recruiting and Retention Officer/Squadron Commander, 1st Lt. Richard Abbey at rabbey@md.cap.gov

​​The Bethesda-Chevy Chase Composite Squadron, founded in April 1965, is currently located in Gaithersburg, Maryland and is assigned to  Group I of Civil Air Patrol's Maryland Wing.

​In December 1941, one week before the Japanese attack on Pearl Harbor, Civil Air Patrol was founded by citizens committed to using civilian aviation resources to help bolster the nation’s defense. Under the jurisdiction of the Office of Civilian Defense and later the Army Air Forces, CAP pilots flew more than 500,000 hours performing a wide variety of duties, including coastal patrol for submarine activity as well as ships and personnel in distress, forest and southern border patrols, target towing for the armed forces and courier flights. On July 1, 1946, President Harry Truman established CAP as a federally chartered nonprofit corporation, and Congress passed a law on May 26, 1948, designating CAP as the Air Force Auxiliary and giving CAP three primary missions – emergency services, cadet programs and aerospace education.

▲ Is congressionally chartered and operates as a 501(c)(3) nonprofit corporation.

▲ Performs services for the federal government as the official civilian auxiliary of the U.S. Air           Force and performs other missions as a nonprofit organization.

▲ Serves as a strategic partner of the Air Force as a member of its Total Force.

▲ Includes eight geographic regions consisting of 52 wings (the 50 states, Puerto Rico and the

▲ Consists of 1,435 squadrons and approximately 59,000 volunteer youth and adult members

▲ Has almost 7,000 aircrew members and almost 33,000 emergency responders trained to

▲ Offers opportunities for members to serve communities, participate in leadership

▲ Contributed over $193 million in man-hours in 2020, serving the emergency services, youth

development and aerospace education/STEM needs of communities, states and the nation.

▲ Operates one of the largest fleets of single-engine piston aircraft in the world, with 560

currently in the fleet.

▲ Maintains a fleet of more than 1,000 emergency service vehicles for training and mission