The Bethesda-Chevy Chase Cadet Squadron (B-CC) was chartered by National Headquarters on April 21, 1965. Members of the Western Cadet Squadron from the National Capital Wing broke off to organize a CAP Squadron on the Maryland side of the D.C. border. The unit was founded and commanded by Captain William R. Hicks, who had returned to Bethesda, Maryland after serving in Special Operations within the US Army.

Under his command, B-CC grew to become the largest Squadron in the Maryland Wing and one of the largest in the nation. Using the skills he learned in the US Army, Capt. Hicks organized a cadet and senior member Search and Rescue (SAR) Team. The SAR Team’s name evolved from Ranger Team, to Ground Rescue Team, to Ground Team. The headgear changed from berets to watch caps to yellow ball caps to field caps. However, the spirit and skills have followed the foundation laid in 1965. Ground Search and Rescue always played an important role in the development of leadership in the cadet program at B-CC. Many of its early members became instructors at the Maryland Wing Ground Operations Academy (GOA) in the 70’s and 1980’s.

Training for SAR was a major activity in the early days of B-CC. A wilderness site was leased to Capt. Hicks by Mr. Bruce E. Saunders. Mr. Bruce E. Saunders was the father of one of the early members and former cadet commander of the squadron, Bruce A. Saunders. Located near Harpers Ferry in Samples Manor, Maryland, this site became a second home for many members of the Squadron. At least two weekends in a month, there was some sort of activity at the “Ferry”. In the summer, training activities and work parties occurred every weekend. The site was an ideal training ground for Search and Rescue. It was nestled in the mountains on the Blue Blaze Trail, a feeder trail to the Appalachian Trail, and only a short hike from the base camp. Towers to train for rappelling and rope work dotted the landscape. Harpers Ferry was also the site of two Maryland Wing Type “B” Encampments in 1981 and 1982.

​Search and Rescue and Disaster Relief

During one of the training weekends in the early 1980’s, the team arrived at the training site moments after an aircraft crashed into the top of the Blue Ridge Trail. Working with the local Dargon Volunteer Fire Department, team members rescued one survivor and assisted in the recovery of three individuals that did not survive the crash. They also extinguished brush fires caused by the fuel in the aircraft and secured the crash site until it was turned over to the NTSB.

Disaster Relief was a recurring mission for B-CC in the 1970’s into the early 1980’s. Since the Harper’s Ferry site was close to the C & O Canal and the Potomac River, B-CC actively monitored water levels on the Potomac River in case the towns along the river had to be evacuated. In September of 1977, after a tropical storm had traveled north along the Appalachian Mountains dumping large amounts of rain in its path, B-CC was tasked to monitor the water levels along the Potomac, concentrating on the area near dam four. Dam four had been severely damaged by hurricanes in 1968 and 1970 that caused major flooding and damage in Sandy Hook and Brunswick. Teams spent 73 hours straight patrolling the area. Just hours before the river crested, the water overflowed the banks of the river and into the Canal. At the time, many sightseers had come out to look at the swollen Potomac because the weather had been sunny and beautiful for the last 24 hours and. The local fire department sent word to the Mission Coordinator that two hikers had been seen leaving their car above the dam and hiking east towards the town. The waters above the dam had flooded over the car and cut them off from the parking area. Although the water was already two feet above the tow path, two members of the Ground Rescue Team volunteered to try and reach the stranded hikers and bring them out. The terrain on the other side of the canal was a 15 to 20 feet rock face cliff. Climbing equipment, first aid gear, and radios where carried in by the two rescuers. The hikers were found about a mile up the path and led out to safety by the CAP members.

The B-CC Squadron has been awarded four individual unit citations for its activities. The Squadron’s size played a major factor in Maryland Wing and Middle East Region receiving three unit citations. In 1977-78, B-CC was selected as the best Squadron in Maryland Wing, the Middle East Region, and the third best in the nation. B-CC was chosen as the Maryland Wing Squadron of the Year in 2000 and Squadron of Merit. Also in 2000, seven members of the Ground Team received a Life Saving Award for USAF Mission 00M1315A. This was a lost person search. The members were responsible for locating the missing individual following a massive search by local officials and CAP Ground Teams.

The B-CC cadets' color guard and drill teams have also won recognition. They were selected several times as the Maryland Wing Drill Team to participate in Region and National competitions. This was a result of hard work and dedication. With a population of close to 100 cadets the Squadron once fielded two drill teams, one male and one female. They practiced every Sunday from 1400 to 1600 in a parking garage in downtown Bethesda. Teams entered and won many local parades.

Helping the community has always been an important part of B-CC’s mission. One charity that was always near and dear to the Squadron was the Montgomery County Association for Retarded Citizens (MARC). For many years, MARC held a fundraiser out in rural Gaithersburg to support its members. The Flying Circus Air Show of Bealton, Virginia would take the show on the road to a farm once a year to benefit MARC. B-CC provided all the logistics and ground coordination for the air show as well as crowd control, parking, and a many other details needed for a successful show. Growth in the county eventually put a halt to the road show.   The Squadron is also an integral part of Montgomery County’s Martin Luther King Day volunteer day operation.  For more than five years we arrive early, help with setting up the facility, unload trucks of material, direct guests to appropriate locations, and describe and explain the mission of CAP.

In 2007, B-CC Squadron acquired an exciting opportunity for community service. Starting in the spring of 2007 the Squadron began to wash the Vietnam Memorial, once a month, in partnership with the Vietnam Veterans of America, Silver Spring Chapter. The veteran’s requested the assistance and B-CC stepped up to meet the challenge.  We provided service for three years.  This activity is now a highly sought after community service project in the Washington, D.C. area. Once this activity ended we have worked with the U.S. Park Service to help maintain the National Mall,  Our cadets and officers have cleaned brush from the District of Columbia World War I memorial, scrubbed Grant’s pool in front of the U.S. Capital, and trimmed shrubs at the Lincoln Memorial.

B-CC has had several homes over its history. When it first began, B-CC meetings were held in the basement of St. Paul’s Church at the intersection of East West Highway and Grubb Road in Silver Spring. In the 1980s, B-CC moved its meeting place to the Kensington Armory. It met there for many years until a new Mayor decided that dancing and bingo were more important. A new home was located for B-CC by a member who was a Spaatz cadet and was serving on the US Army Reserve staff at the Pentagon. The unit moved into the 220th Reserve Center just outside of Montgomery Village. During the second Gulf War, the 220th was activated and B-CC was forced to move once again. B-CC moved to the Olney Military Reservation, a Maryland Army National Guard base in Gaithersburg. After a couple of years, the base was scheduled for a face lift so the Squadron relocated to Forest Oak Middle School.  The Army National Guard rebuilt its facility in Olney as the Army National Guard Olney Readiness Center and the Squadron once again relocated to the facility thanks to the assistance of Lt Col Eric Haertel.  In 2017, the Squadron moved to its current location at the Montgomery County Public Safety Headquarters, located in Gaithersburg, Maryland.  We would like to thank Capt. Jocelyn Santos for helping to secure this great location for our growing Squadron!

The Bethesda-Chevy Chase Composite Squadron patch was originally designed based on the Maryland Wing operating instructions for unit patches that required a round 3" patch in size. The name of the unit is in the outside circle. The "informal" mascot and the name of the newsletter for B-CC was the Bald Eagle. This name was chosen since the bald eagle is the symbol of our nation, and because the founder of B-CC, Captain William R Hicks, was bald! The Bald Eagle sits atop a banner with the unit motto selected by the cadets: "Improvise, adapt, overcome".  Behind the eagle is a triangle reflecting the heritage of our Civil Defence days. The prop/triangle/circle reflect our aircrew missions and the GT/triangle/circle reflect the strong history of ground team service in the squadron. The primary colors are red/white/blue reflecting the nation's colors.  The design of the patch was worked on by Lt Col John M Knowles, Capt Dave Staples, and several squadron cadets.

The Squadron Patch was re-vamped in 2017 to meet new Civil Air Patrol heraldry standards using the original patch as the framework.  Heraldic standards add a scroll to the top containing the Squadron's motto and a scroll on the bottom with the Squadron Name.  Major portions of the patch remain the same, which exception of The Eagle which continues to sit atop a banner now honoring the founding year of the Squadron.

​Are you a former member of B-CC? Do you have any photos or stories that you would like to share? If so, please contact us via the "Contact" tab at the top of our page. We look forward to hearing from you! 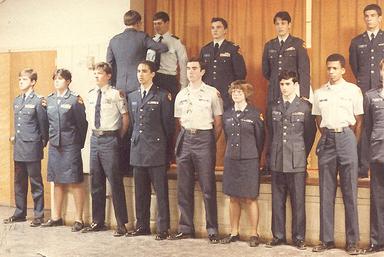 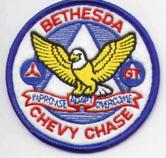 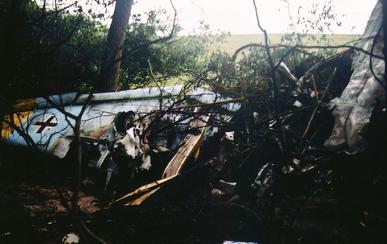 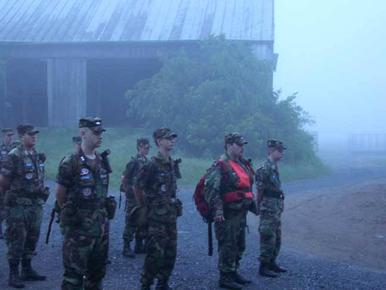 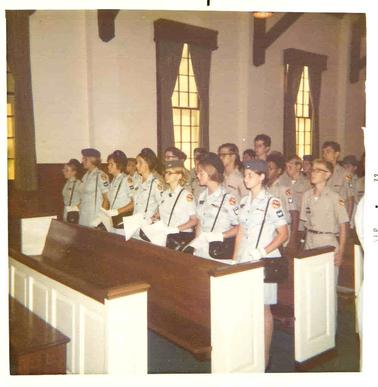 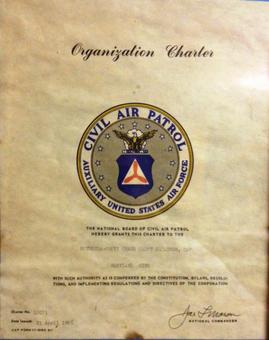 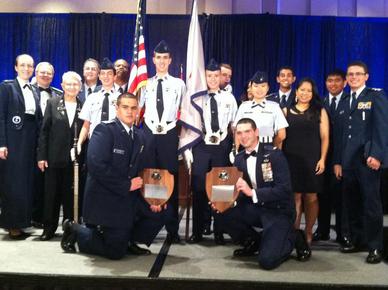 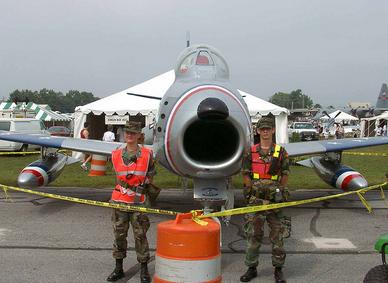